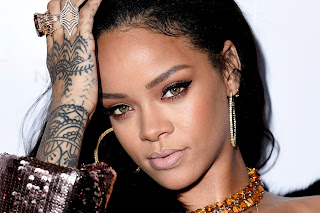 The stunning superstar Rihanna surprised everyone at Comic-Con during a panel for Bates Motel when she bust on the scene to announce her recent (temporary) (iconic) addition to the cast.

“I am about to check into the Bates Motel very soon,” she said in a video that was played during the panel. “Guess what else? Guess who’s playing Marion! Yes, so all you Comic-Con fans, all you Bates Motel fans, stay tuned! And excuse my bedroom, I decided it had the best lighting.”

First: the bedroom line. Classic Bad Gal RiRi. I love her so much.

Second: For those of you who forgot/are not old AF, the Marion she’s referring to is Marion Crane, the woman who is stabbed to death in the shower in Alfred Hitchcock’s classic psychological mind-fuck, Psycho — which, of course, Bates Motel is a prequel to. The role was originated by Janet Leigh, and Rihanna is the perfect heir to this iconic tragic heroine. You know she’s gonna be perfection. Haahahahaha!
Download MyApp here http://app.appsgeyser.com/ChidiPalace

Cristano Ronaldo to have Airport?