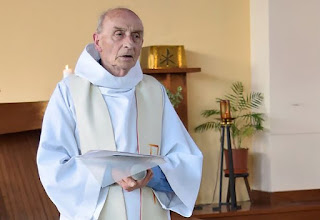 According to Mirror, the ISIS terrorists who carried out the France church attack forced an elderly parish priest to kneel before filming themselves slitting his throat, it has emerged.

Father Jacques Hamel, 85, was made to get to his knees before he was brutally butchered at the Church of the Gambetta in Normandy today, says a nun who escaped the attack.

His two murderers – one of whom has been named as 19-year-old Adel Kermiche – captured the slaying on a mobile phone, according to Sister Danielle, who was one of several worshippers taken hostage during morning mass.

They then performed a ‘sermon’ around the altar in Arabic – as armed cops rushed to the scene and terrified members of the congregation fled for their lives.

Before his death, Father Hamel courageously tried to defend his parishioners, says the distraught nun, who raised the alarm after fleeing the church.

“They [the terrorists] forced him to kneel and he tried to defend himself and that is how the drama started,” she told RMC radio this afternoon.
Source: Mirror

Shocking! Nigerian Man has transitioned into a Woman

This Story Will Shock You! HIV-infected man paid to have sex with young girls for cleansing ritual