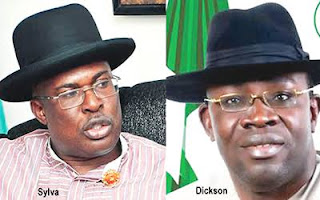 What will become the fate of Governor Dickson today in the likely to be the final tribunal judgement? Will the judgement favour Dickson or Sylva? For the past weeks the All Progressive Congress (APC) Bayelsa chapter have been in high spirit and jubilation-motivated, waiting for the likely favoured judgement.
The question is if tribunal delivers judgement in favour of APC, Will Chief Timipre Sylva assumed office?

The Bayelsa Governorship Electoral Tribunal sitting at the Federal Capital Territory, Abiuja, is set to deliver it’s final judgment on Tuesday July 26th 2016 by 3pm prompt at the court room and would be opened officially by 2pm.

This was contained in a letter signed by the tribunal secretary informing parties, that only two representatives for each of the petitioners and each of the respondents shall be allowed into the court roon, apart from council to the parties.

The Bayelsa Governorship Election Tribunal had reserved delivery of judgement in the petition filed by the former governor of Bayelsa State, and flag bearer of the All Progressives Congress (APC) in the Bayelsa governorship election, Mr Timipre Merlin Sylva on July 29, 2016.

The three-man panel led by Justice Kazeem Alogba told the court, that the Tribunal will inform parties 48 hours to the day judgement will be delivered and all roads leads to Abuja, the country’s capital for the much awaited judgement which many say, is the last hope for the good people of Bayelsa State.

The petitioner and governorship candidate of All Progressives Congress (APC), Timipre Sylva is challenging the re-election of Governor Seriake Dickson on the ground that the election was marred by violence and electoral irregularities, while the respondents; Independent National Electoral Commission (INEC), Governor Dickson and his party, the Peoples Democratic Party (PDP) is asking the tribunal to dismiss the petition for lack of substance and merit.