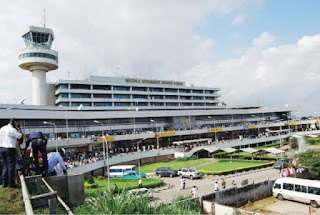 Thursday night the Murtala Muhammed International Airport, Lagos, was saved by men of the Airport Fire and Rescue Services Department from being consumed by fire. The fire which occurred at the E-Wing of the airport terminal emanated from the airport electrical control panel and was quickly put under control by the Federal Airport Authority of Nigeria, FAAN, fire fighters.

According to Dati, “A quick response by men of the Airport Fire and Rescue Services Department has averted a fire incident at the Murtala Muhammed International Airport, Lagos.” “The incident, which occurred at the E-Wing on Thursday, July 28 2016 at about 1100pm did not affect flight operations. Preliminary investigation indicates that the fire emanated from the electrical control panel.”

“Our engineers who have restored power at affected areas are working round the clock to restore normalcy. Members of the public are therefore advised to disregard nay-sayers who may want to exploit the situation to create unnecessary panic.”

“The Federal Airports Authority of Nigeria wishes to apologise to all travellers and airport users for inconveniences caused while assuring them of their safety and security.”