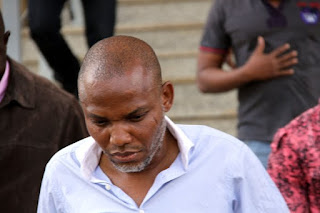 The Ohanaeze Youth Council, OYC, has demanded the immediate release of Mazi Nnamdi Kanu, saying it was long overdue.

According to Daily Post, President of the OYC, Mazi Okechukwu Isiguzoro, issued a statement in Enugu on Monday, said such step would help in calming frayed nerves across the South-East and the South-South region.

He declared that “the continuous detention of Nnamdi Kanu is in no small measure contributing to the volatile security situation in the Southern Nigeria.

“On so many occasions, several agitating groups have given his detention as one of the many reasons behind their activities.

“In the light of the above, we urge the President Muhammadu Buhari administration to give peace a chance by enabling at atmosphere of dialogue.

“Both the international conventions and the Nigerian Constitution allow for self determination. However, we insist that such much be done with due regard to the laws of the land.”

“We, therefore, urge the present government to unconditionally free Kanu from detention.

“The government should take our assurances that we shall make efforts that no one take up arms against the government‎. We say this because the IPOB, to which Kanu is a member, has remained non-violent and peaceful”, he added.
Daily Post

Is Timipre Sylva Coming to Bayelsa Government House as Governor?

Shocking Revelation! 9 Years Old Taiwo Who was Chained By His Father Speaks Up