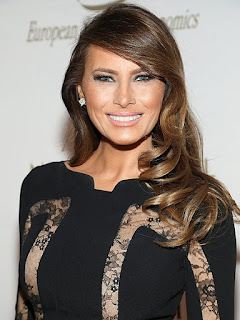 On the first night of the Republican National Convention, all eyes were on Donald Trump’s wife, Melania, as she gave her biggest speech yet of the presidential campaign. Donald introduced her in a brief appearance, calling her “an amazing mother [and] an incredible woman.” In her speech, Melania talked about her upbringing in Slovenia, her parents, and how she became a United States citizen, “the greatest privilege on planet Earth.”

“From a young age, my parents impressed on me the values that you work hard for what you want in life. That your word is your bond, and you do what you say and keep your promise. That you treat people with respect,” she said. “We want our children in this nation to know that the only limit to your achievements is the strength of your dreams and your willingness to work for them.”

But mostly, she talked about Donald, his platform, and his personality. “He is tough when he has to be, but he’s also kind and fair and caring. This kindness is not always noted, but it is there for all to see,” she said. “That is one reason I fell in love with him to begin with.”

She received a standing ovation by mentioning that Donald “intends to represent all of the people…that includes Christians and Jews and Muslims and Hispanics and Asians.” The Internet’s favorite line, though, was an unwitting reference to Rick Astley: “He will never, ever, give up. And most importantly, he will never, ever, let you down.” Continue here in style
Source: Cosmopolitan

Wooh! Beyoncé's Hairstylist Says it Only Takes Him 5 Minutes to Do Her Butt-Length Braid