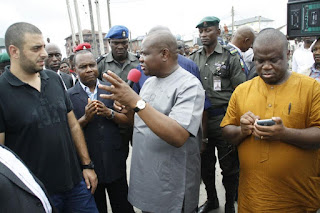 In a statement issued by All Progressives Congress, APC, Rivers State Chapter on Thursday, cautioned Governor Nyesom Wike against threatening electoral officials ahead of the rerun elections in the State. The party’s position was contained in a statement which was issued by ‎ Chris Finebone, its State Publicity Secretary.

‎It read: “The reaction of the Rivers State Chapter of the All Progressives Congress, APC, to the wild and unconscionable assertions of Gov. Nyesom Wike at Okehi today is that this must be the classical case of an evil workman quarrelling with his tools, his neighbours and passers-by.

Let it be on record that neither Chief [Dr] Davies Ibiamu Ikanya JP nor the Rivers State South-East Senatorial Candidate of the APC, Senator Magnus Ngei Abe, separately or as a group, met with the Chairman of INEC or any INEC personnel at the Commission’s Headquarters or anywhere else as contrived by Gov. Wike. If the governor claims to have any information suggesting that any such meeting took place, he should feel free to make the details public for the benefit of all.

The APC in Rivers State is indeed ready to participate in the forthcoming rerun election as scheduled by INEC. The PDP should not bother themselves as to the modus of campaign of the APC. We are at liberty to reach the electorate the best way we can. If our style is devoid of the typical razzmatazz, so be it.” Read in full