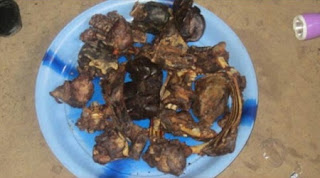 A 60 years old woman alleged to be a Nigerian was on Wednesday 20th July accused of selling human parts as fried meat in a popular market in Accra, Ghana as reported by Daily Post

According to Ghana Radio, Adom FM, the woman raised suspicion by her strange movement at the Adabraka Market and vigilant traders were said to have dragged her to the Adabraka Police Station.

APC Cried Out! Governor Wike Should Stop Threatening Everyone