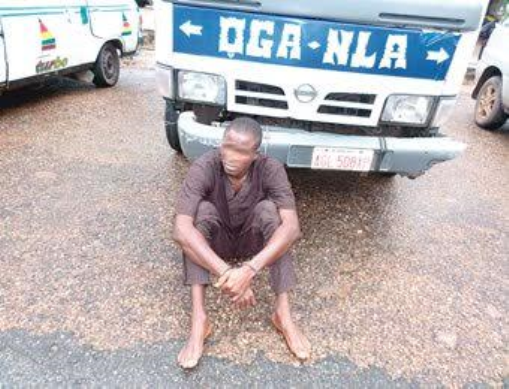 30-year-old man, Jimoh Taoreed, pictured above has been arrested after he disappeared with a van used to distribute sachet water produced by his employer, the Anglican Diocese, at Bodija area of Ibadan, Oyo State, barely 24 hours after he was employed.
Parading Jimoh before newsmen at the state police command, the state police commissioner, Leye Oyebade said Jimoh applied for the job with the intention to steal.

When he applied for the job, he gave his name as Saheed Popoola and said that he was an indigene of Eruwa town in Ibarapa area of the state. However after his arrest, it was discovered that his real name was Jimoh Taoreed and he hailed from Irawo Owode in Atisbo Local Government Area.

Taoreed and his assistant, a motor boy, on the day he absconded with his company bus, had gone to distribute bags of sachet water to buyers on June 30th but after carrying out the task, he deceived his assistant by telling him that he wanted to withdraw money from a bank in another location at same Bodija area. After he parked the vehicle, the unsuspecting conductor also alighted to transact business in another bank, but before his return, Taoreed drove the vehicle to an unknown place and was not seen again until his arrest, Oyebade stated further. Jimoh was arrest and the vehicle was recovered at Irawo Owode.

On recovery of the vehicle,Jimoh had removed the inscription that was originally on it and replaced it with Oga Nla which means Big Boss.

“About three weeks ago, while distributing bags of water to customers, a spirit pushed me to drive the vehicle away. The thought was countered by another spirit which told me not to do it. But at the end, I obeyed the first one that urged me to steal the vehicle. I left the person who was distributing the water bags and drove the van to my village. I went to pay for a bold sticker reading ‘Oga Nla’ (Big boss) and posted it on the van. Unfortunately for me, I was traced to my village and arrested. I was suspected by my family members that I stole the vehicle. I believe they were the ones who informed the police. I admit that my act is of the devil and I promise not to do so again.”
Source: Tribune

See what happened to Nigerian tomatoes as it crashed