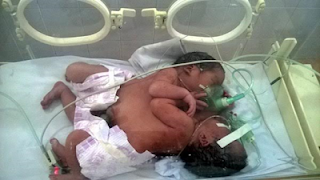 Sometime life  is difficult but so sympathetic. All the same its courage to fight through. What can you say?
A 20-year-old Vietnamese woman gave birth to a pair of twins joined at the torso on Wednesday, July 13. Phan Thi Chay, who is from a poor ethnic Dao family in in the northern mountain province of Ha Giang, was not aware she was pregnant until she was admitted to the Vi Xuyen General Hospital to give birth.

According to Thanhnien News, after doctors diagnosed her with fetal distress, they decided to perform a C-section and saved the conjoined baby boys, who together weigh 4.9 kg and have separate hearts and lungs.

Nguyen Ngoc Chung, the hospital’s deputy director, said the twins have recovered and have been taken to Hanoi for further examination. The hospital has donated money it collected from staff and from its fund for poor patients, he added, while calling for more donations to help the poor mother.

Dr. Chung on Thursday, July 14 went in his doctor’s coat to a local market to solicit donations. He said he wanted to help the poor family though he could be censured for not seeking the hospital’s permission first. He has so far raised around US$1,800.